Changing the world one byte at a time

Working at a world class VR lab in the University of Sydney with Associate Professor Hamish MacDougall and Dr Elodie Chiarovano, we developed several vestibular related tests using VR. One test that I found particularly interesting to program was the Dynamic Visual Acuity Test (DVA).

The dynamic visual acuity test is used to diagnose patients vestibulo-ocular reflex (VOR) function. The VOR is the mechanism our body uses to counter-rotate our eyes in relation to the rotation of our head. Without this vital counter-rotation the image we see would blur across the sensitive part of our retina, drastically reducing visual acuity as we look around. 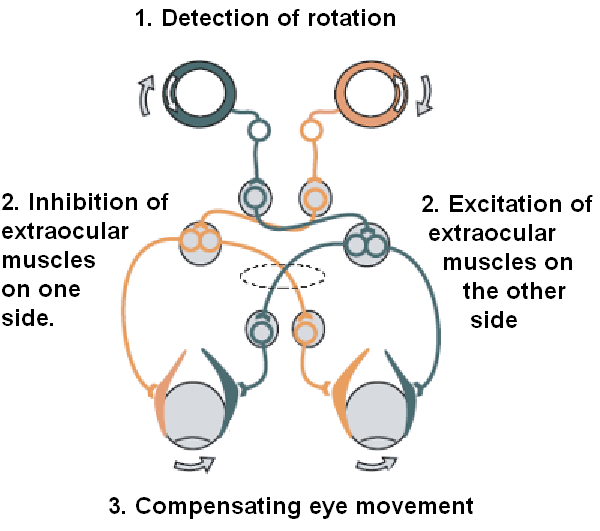 This reflex is driven by our vestibular system; a complex labyrinth of channels built to give us balance and spatial awareness. The vestibular system allows us to detect rotational movement and linear acceleration.

The VOR is driven by these functions using impulses derived from the semicircular canals that form part of your vestibular system. It operates on a “push-pull” system. When one canal is stimulated, the opposing canal is inhibited. These signals in turn either inhibit or excite the muscles in your eyes, resulting in the perfect cancelling out of motion, allowing for a clear image on the retina as one moves their head around.

To give you an idea of how important your VOR is, a patient without a properly functioning VOR can have significantly reduced visual acuity that no prescription can fix. This is because of a misunderstanding that reduced visual acuity must always be the result of some imperfection in the eye and thus is also a limitation of many subjective eye tests.

To address this, various tests have been developed in an attempt to measure the functionality and effectiveness of a patient’s VOR. Many “traditional” tests have left much to be desired, and for a long time researchers and clinicians alike have dreamed of a better way to conduct these tests on patients.

The DVA test I worked on offers a great improvement to its predecessors. It’s not that other tests didn’t work, but one common problem has always been the high cost of equipment and complexity of these testing procedures. Another unavoidable aspect of a lot of other tests is their subjective nature.

The DVA test uses VR technology to vastly improve upon traditional testing methodology. Most older tests required the clinician to manually rotate the patients head while performing a visual acuity test. The speed of rotation would be quite variable and there was no guarantee that the patient was fulfilling the necessary criteria for the test to function properly.

The DVA test uses the highly precise gyros built into the VR headset to ensure the patient is properly rotating their head during the test.

In the SVA portion of the test, we are simply testing how well the patient can visually see. Think of an eye chart at the optometrist’s; the patient reads down each letter until they can’t make anymore out. The optometrist then determines a score in LogMAR from this; the smaller the LogMAR the better the vision.

We do the same thing in our test, except the clinician doesn’t have to lift a finger as the test is automated. The test works by showing 1 of 8 different patterns at some size for a short period (see example above). If the patient correctly identifies the pattern, the next pattern will be smaller. Alternatively, the pattern becomes larger. What we are looking for is the size at which the patient can identify the pattern correctly about 50% of the time. Once we meet this condition, the SVA portion of the test ends.

This leaves us with an interesting problem: How do we determine the optimal stimulus size to reach the 50% mark as quickly as possible?

In 1982, HARRIS R. LIEBERMAN and ALEX P. PENTLAND went about solving this exact problem. Their solution, named Best PEST, was a computer algorithm for determining the optimal stimulus size based on a right/wrong input. Implementing this algorithm was one of the breakthroughs that allowed this test to be feasible. It took what would have been a thirty minute test and reduced that down to around five minutes.

Now we’re at the meaty part of the test, the dynamic portion. In the dynamic portion of the test the patient rotates their head back and forth horizontally; a beat is provided to help them do so. Only when their head motion exceeds a certain velocity, either moving left-to-right OR moving right-to-left, the pattern is displayed on the VR headset. The patient then enters the pattern they saw as before.

What’s happening here is that by only showing the target when the patient’s head is moving we are able to determine if the patient’s vestibulo-ocular reflex is functioning. The reflex is what keeps the pattern on the sensitive part of their retina. If their VOR isn’t performing, their ability to recognise the pattern will be significantly worse than in the SVA.

During the dynamic portion of the test, we’re actually doing two tests in one. What I mean by that is we both conduct the left-to-right and right-to-left tests at the same time. We do the dynamic tests in both directions to allow us to test for both unilateral and bilateral weakness.

The dynamic tests end with the same condition as the static test, at the point when the patient is only able to recognise the pattern 50% of the time. When the test is over, the results are displayed in LogMAR units.

Larger LogMAR numbers suggest a deteriorated visual acuity, whereas smaller numbers suggest better visual acuity. In a normal patient with properly functioning VOR, we expect the results from the static and dynamic portions of the test to be similar. If the dynamic test is significantly worse then the static test, we know there is an issue with the patient’s VOR.

With the advent of affordable VR headsets we are able to deploy tests like this one to clinics around the world very cheaply. The days of expensive inaccessible tests are soon coming to an end and the manifestation of technology like this really excites me. Furthermore software can be distributed with virtually no cost assuming the hardware needed is widely adopted.

Where do you see the serious application of these technologies leading us? I’d love to hear you thoughts in the comments.

Adding Sophistication To Android Apps With A Database

The Software Interface Behind The Hardware Devices – μVEMP